A memorandum by Econews Africa on Questions, Issues, Scope, Strategies, Prospects and Options 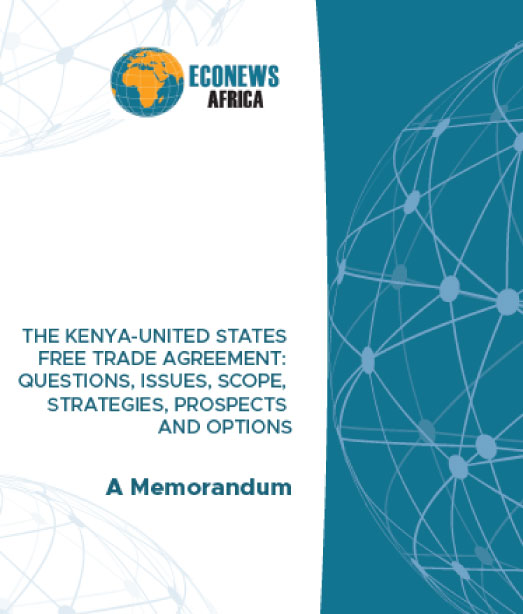 On March 2020, at the direction of President Donald J. Trump, the United States Trade Representative (USTR) Robert Lighthizer notified Congress that the Trump Administration will negotiate a free trade agreement (FTA) with Kenya. “Under President Trump‘s leadership, we look forward to negotiating and concluding a comprehensive, high standard agreement with Kenya that can serve as a model for additional trade agreements across Africa,” said Ambassador Lighthizer, in the said letter.

According to the USTR, the proposed FTA intends to ―build on the objectives of the African Growth and Opportunity Act (AGOA) and serve as an enduring foundation to expand U.S.-Africa trade and investment across the continent. When the Kenya-U.S. FTA negotiation commences, the U.S. will not be negotiating in a vacuum. The U.S. will be negotiating the Kenya-U.S. FTA against the backdrop of some recent trade negotiations involving the United States and against the backdrop of key U.S legislations, executive orders, and policy actions that collectively shed light on the negotiating priorities, strategies, and motivations of the United States.

Comprehensive trade deals of the size envisioned by the United States are not easy to pull off. The United States will undoubtedly be the more dominant player in a Kenya-U.S. FTA negotiation. Indeed, experts agree that few countries come close to negotiating on parity with Washington. For both sides, it will undoubtedly be a long path to negotiations. Consequently, it is important that the Kenyan Government is fully briefed on:
1. The critical pillars of President Trump‘s trade policy.
2. The critical aspects of President Trump‘s trade strategy and capacity.
3. The important lessons that Kenya could draw from recent trade negotiations and/or deals involving the United States.
4. The potential risks to domestic regulatory space of a comprehensive Kenya-U.S. FTA.
5. The potential risks to domestic and regional policy coherence of a comprehensive Kenya-U.S.
FTA.
6. Controversial issues that might prolong talks.